RailsConf 2019 is here! No, really - here in Minneapolis, Minnesota! The local Ruby community is thrilled to welcome you to our hometown.

Visiting the Twin Cities for the first time? Wondering what to wear? Where’s the good food and what’s a “Jucy Lucy”? Beer lover? I present to you the RailsConf 2019 Visitor’s Guide to Minneapolis, created with love by myself, Charles Nutter, and others at RubyMN!

Both cities have their own flavor and charm, and there’s plenty to see and do in both! This post focuses more on Minneapolis, where you’ll be staying - but remember that St. Paul is connected via the Green Line or it’s a short rideshare trip away.

I know, I know - you’re worried about the weather. It does get very cold here, but the summers are quite lovely. Before we get to those summers, however, Minnesota goes through what we like to call ‘2nd Winter’ (aka ‘spring’). It is currently ‘spring’.

After a week of beautiful sunny skies and ~75º (24ºC), we’re regrettably going to experience a temperature drop and rain during the conference. But don’t worry! I’m told the weather in the Convention Center is actually quite temperate.

Are you worried about the previous weekend’s forecast of…snow? Don’t. It’ll be gone or plowed (yes, we have plows!) before you get here. Really! It’s ok.

“Soooo do I need to bring a jacket?”

Yup. But you don’t need the world’s heaviest winter jacket. The single easiest way to be comfortably warm in cooler weather than you’re used to is by wearing a hat and gloves. So bring a light jacket and, if you think weather in the 40s sounds super cold, a hat and some gloves for when the sun goes down and you happen to be outside longer than just a few minutes. 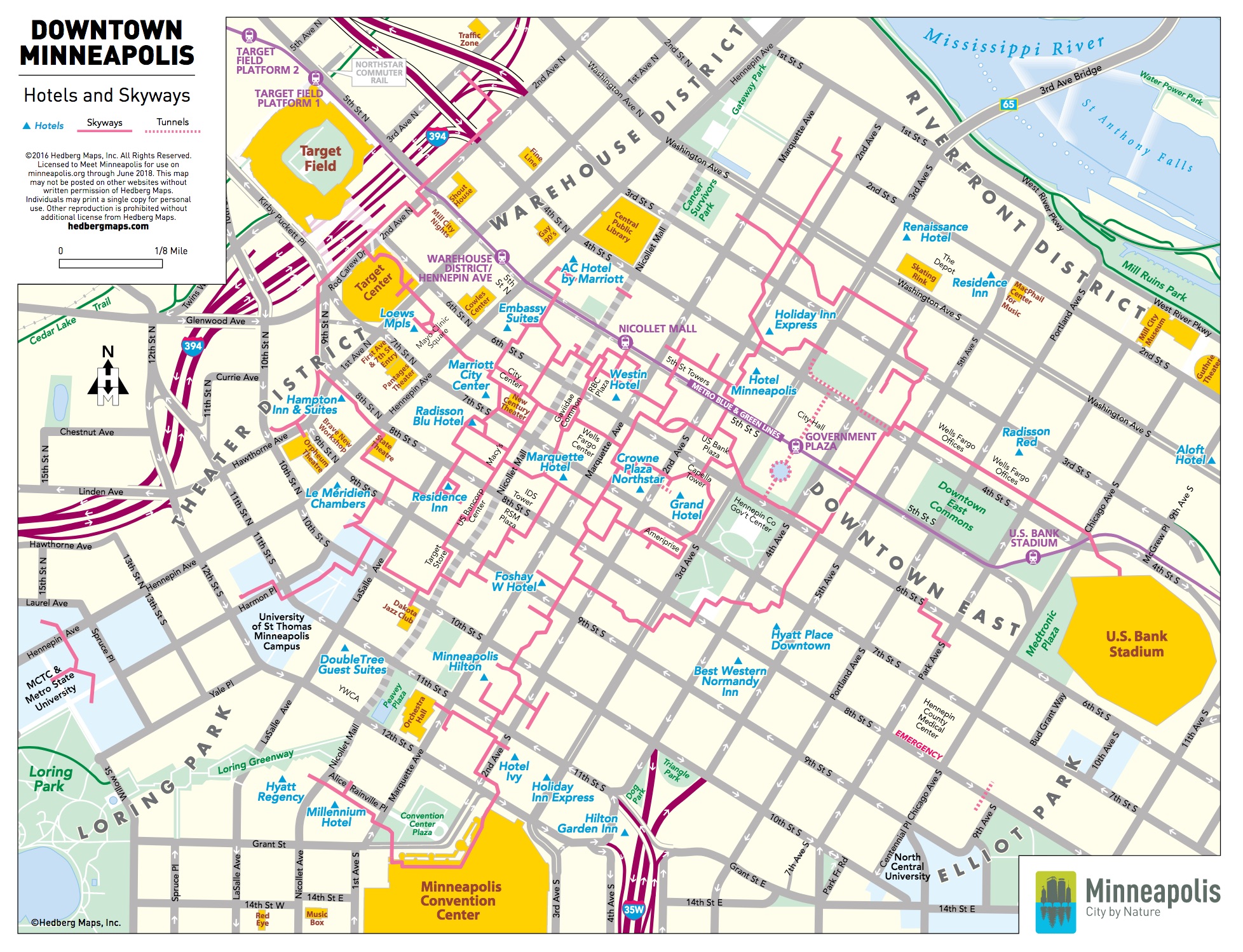 It gets pretty cold here in the winter time. As such, Minnneapolis and St. Paul both have extensive skyway systems: a giant string of enclosed pedestrian foot bridges connecting downtown buildings, above street level. In fact, the Minneapolis skyway system - which cover 80 city blocks spanning 11 miles (18 km) - is the longest contiguous system in the world.

The skyway conveniently connects the conference hotel to the conference venue. However, if you’re going for a longer stroll through downtown I recommend to just go outside while you’re visiting; it’s much more enjoyable and faster in most cases. It’s definitely an option if you’re feeling extra chilly, though!

You’re in the middle of the continent, as Midwest as you can get. The food has to be terrible here, right?

Wrong. The Twin Cities has some really great food. You’ll find plenty of local delicacies here in the Land of 10,000 Lakes, whether it’s Jucy Lucies (where we unabashedly take credit for Wisconsin’s cheese) or some walleye from our 11,842 lakes (see what I did there?). You won’t find just Midwestern comfort food here, either: the Twin Cities has a great variety of culture for some amazing spots you’d never think were possible up here in the North.

A true list of all the great places to eat would be impossible to fit on here, but I’ll throw in some convenient places by the conference hotel and some favorites all around.

Around the conference hotel (Downtown)

There are tons of places to eat within walking distance of the conference hotel. This list is far from exhaustive.

~10 minutes away via rideshare 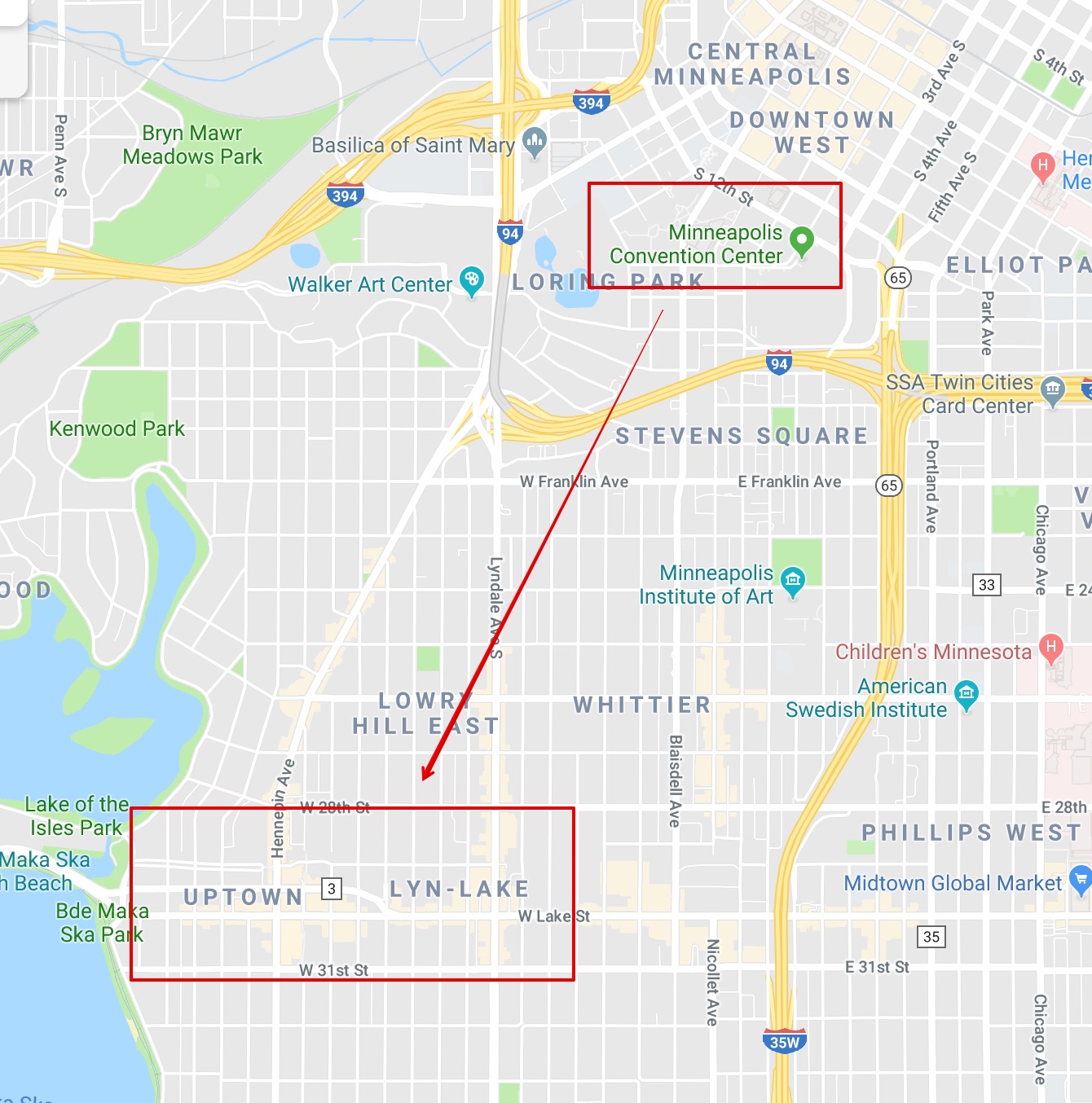 Uptown (at Hennepin and Lake), which is actually south of downtown, is one of the more well-known hang-out spots in the city. I wouldn’t call it a tourist trip - it does have some good spots in it - but note that a lot of locals would consider it synonymous with Times Square in New York (many locals scoff and avoid it). It’s right next to Lyn-Lake (at - you guessed it, Lyndale and Lake), which is great, and so although the most pedantic locals would argue against it I’ve just grouped them in to one area here for you.

Here’s a great list of good picks for the area.

< 10 minutes away via rideshare or a long walk 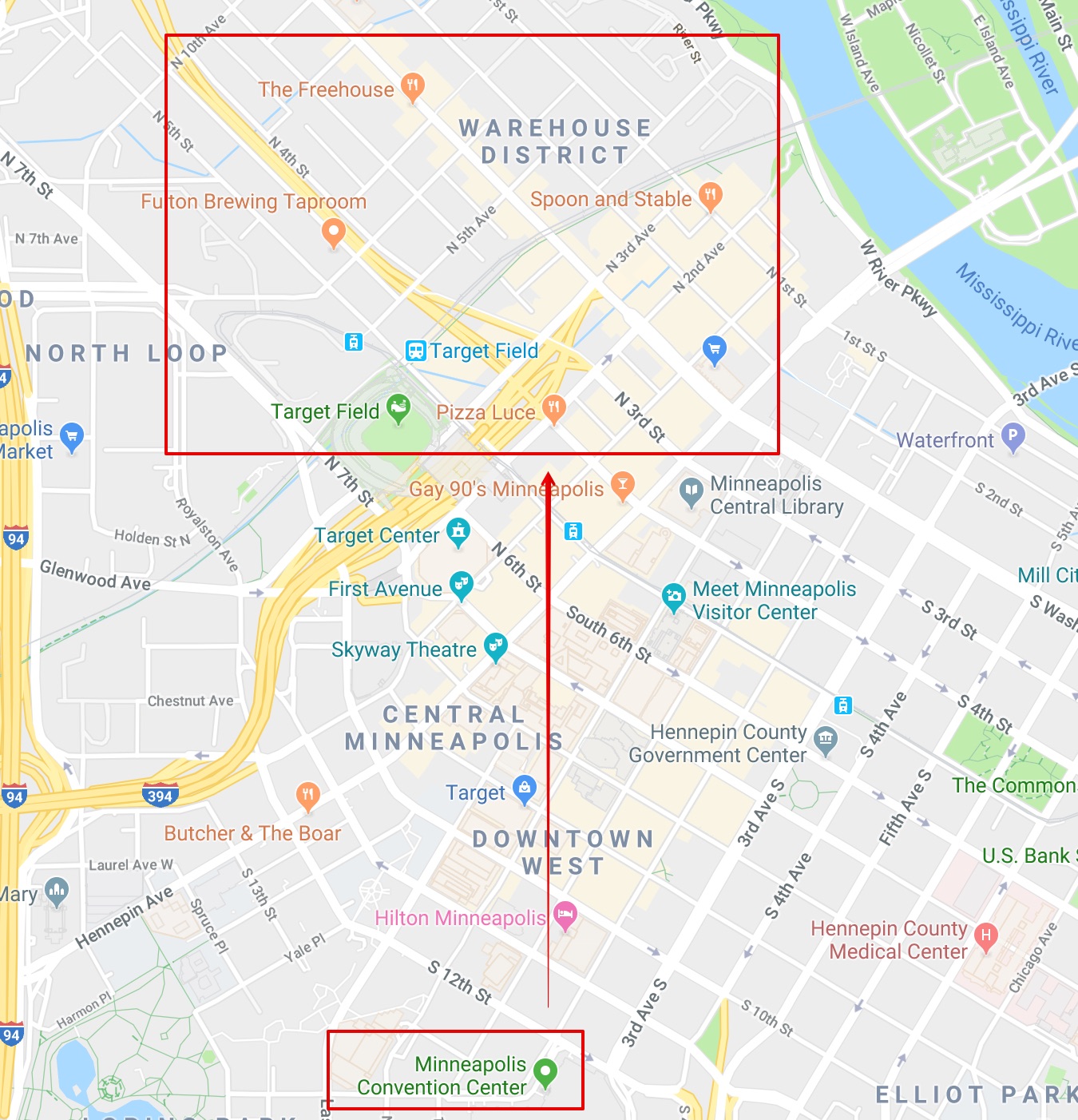 Here’s a great list of picks in the North Loop. There’s a ton of great picks here, but I’ll share a few favorites. 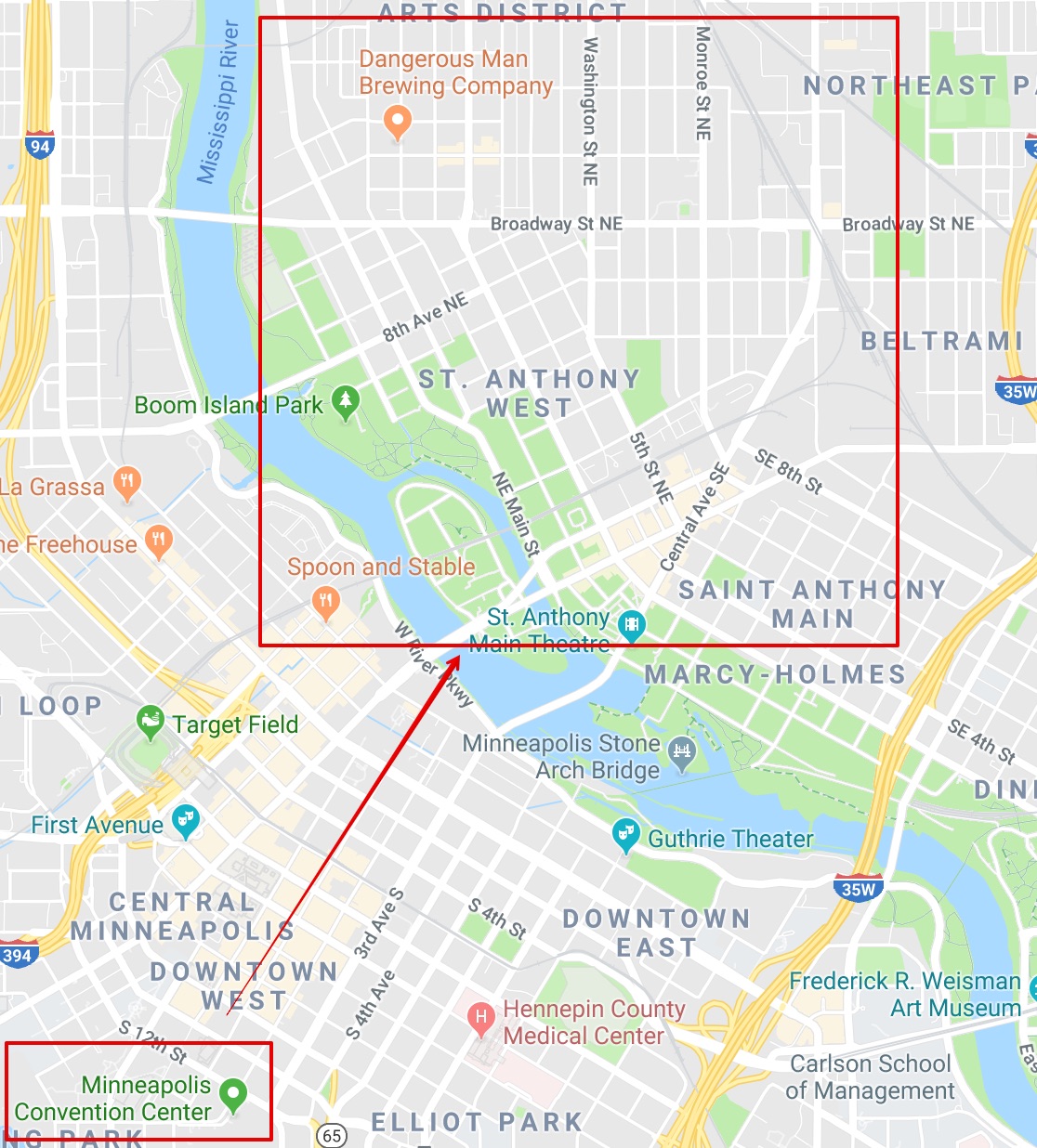 The Northeast neighborhood right across the river has a huge number of taprooms (some mentioned in Craft Beer) and some solid food.

Did I mention there’s an entire separate city in the Twin Cities? Down the river from Minneapolis lies St. Paul with all it’s own picks. The Mpls/St Paul magazine list here is also pretty good. Some highlights/additions:

Some of the closest and best vegetarian options are in Uptown/Lyn-Lake, including:

Beer lover? The Twin Cities’ craft beer game is strong. Here’s a very small selection of some of our favorites, sorted by distance from the conference hotel/venue:

Close to the conference hotel:

Midway refers to the area between Minneapolis and St. Paul (which is mostly just a part of St. Paul)

These are well out of your way, but have to be mentioned as they are the certified Favorite Breweries™ of one of our resident JRubyists and founding members of RubyMN.

As has become tradition, Mike Perham has once again posted a listing of official and unofficial RailsConf related events and parties on his website, and I’ll leave that as a canonical source to reference. Check it out!

I will note here that sadly the RubyMN meetup is already full and we can’t really take on any more RSVPs, purely due to the amount of space we have at the venue. As it turns out, a venue that can support 60ish people fills up pretty quickly with 1200+ Rubyists in town!

There’s so much to do and see around the Twin Cities - remember, the conference is in Minneapolis but there’s a whole other city just eight miles away (contrary to what some Minneapolitans might purport).

As always, remember that this list is far from exhaustive and undoubtedly will get added to as more things come to mind/are suggested by others.

These are a trip, but should be mentioned anyway:

I’m so stoked you’re here; enjoy your time in the Twin Cities! Do come say hi during the conference! I have a lot of RubyMN stickers to give away. 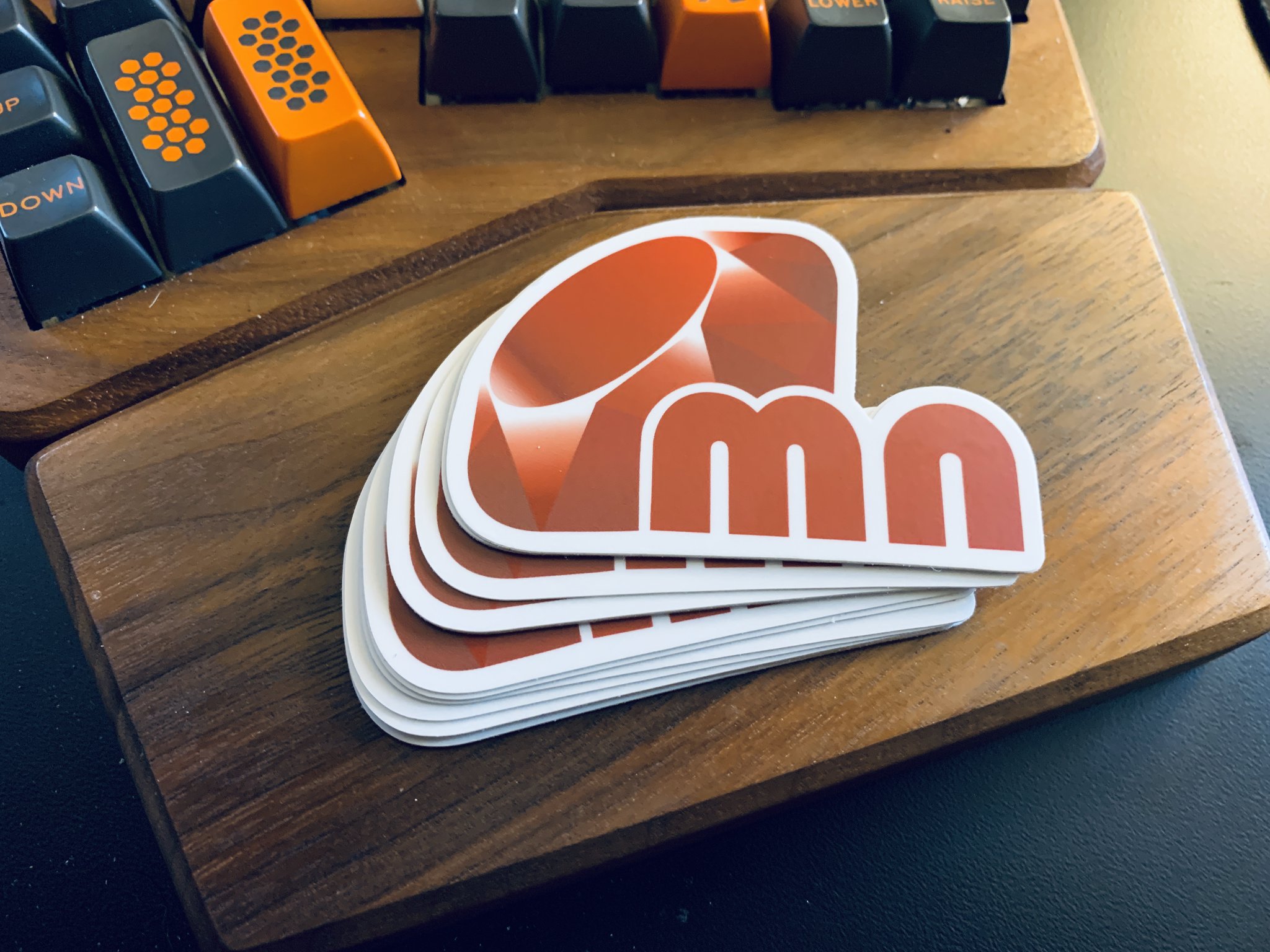 Thank you to the local Rubyists that contributed to all this content!